Harry Potter has one of the largest, most engaged fanbases ever seen — with over 74 million Facebook fans, over 2.4 million fans on Twitter and over 4 million on Instagram. With that said, we are excited to announce this new collection — which is sure to ‘wow’ witches, wizards and muggles everywhere!

Brand new for 2019, Department 56 — in collaboration with Warner Brothers Studios — have created exacting reproductions of some of the most iconic buildings from the world of Harry Potter. Working from the precise specifications provided by the film studio, their artists have accurately crafted scaled figurines of key locations — including the majestic, Hogwarts Great Hall and Tower; Ollivander’s Wand Shop; and the cosy dwelling that is Hagrid’s Hut, to name just a few. All three feature a high level of detail — from the twin witch-hat roofs of Hagrid’s Hut, to the leaded windows of the Great Hall — and are brought to life in the dark by the gently glowing lights inside (powered by a USB adaptor). 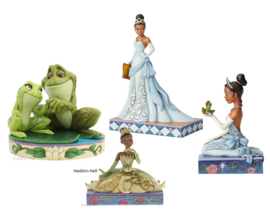